Book a online 30 minute Rune Reading today with Gaia Evalyn Love who is a psychic and clairvoyant, which runs in her matriarchal family blood line.

Runes are one of the oldest divination tools used by mankind. Through the power of the runes you can receive guidance, insights and knowledge in to your current situation, future and destiny path.

Once you have made your Booking you will be contacted to arrange the date and time of the online reading which can be either on Skype, Whatsapp, Zoom or Facebook Video Chat.

Runes are ancient symbols originating from Northern Europe that are used as tools of communication, divination and power. Norse and Germanic people’s wrote runes since at the least the first century however the origin of the runes is thought to be much more ancient and have even been found at The Bosnian Pyramids which are thousands of years old. Runes can also be used in Magic Spells for protection. 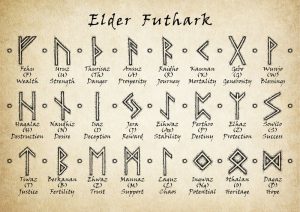 The Runic symbols hail from the well of Urd which is the source of fate – The Norns Yrd, Verdani who are powerful and primordial feminine beings of destiny which represent past, present and future. The Norns used the runes to carry the fate of peoples up the world tree or Yggdrassil and in to the nine worlds.

The Elder Futhark is one of the oldest known form of runic alphabet which comprises of 24 runes, divided into three groups of eight, each of which attributed to a Norse God Freyr’s ætt, Heimdall’s ætt and Tyr’s ætt.

Runes are often carved in wood and cast on a white cloth in an East to West Axis. By learning to understand the runes, we can channel their energies and gain great wisdom and power.