Welcome. Gaia is a Psychic Empath and Clairvoyant which runs in her Matriachal bloodline. Through the power of the runes and Gaia’s psychic abilities you will receive guidance, insights and knowledge in to your past, current situation, future and destiny path.
Book 30 minute a Psychic Rune Reading with Gaia today for £29. You will be contacted to arrange a time and date after booking in, Rune Readings are held via Zoom.
Runes are one of the oldest divination tools used by mankind. Runes are the symbols for some of the most powerful energetic forces in the cosmos and are an ancient Germanic Alphabet that originate from northern Europe. 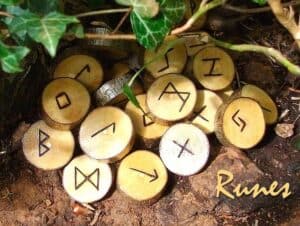 The Runes are associated with ancient Nordic Mythology and Nordic Gods as well as Yggdrasil or the World Tree. The world tree connects the nine realms of existence in Norse Mythology and stands at the centre of the universe. At its roots live Urdr, Verdandi and Skuld also known as The Three Norns who are the three maidens of destiny that govern people’s past, present and future.

The oldest Runic Alphabet is called the Elder Futhark which contains twenty-four runes with the first six Runes spelling out Futhark. The Runes are split into three different groups of eight the first is Freya’s Aett, the second is Hagalaz Aett, the Third is Tyr’s Aett. Each runic alphabet letter is also a symbol that has meaning.